Cells, the basic units of life, must communicate with each other to form fully integrated, complex living organisms. Our work is focused on one particular short-range cell-to-cell signalling pathway, termed Wnt signalling. The Wnt signalling pathway controls a multitude of biological processes throughout development and adult homeostasis of multicellular animals (Metozoans). Although much knowledge has been gained since the discovery of this fundamentally important pathway in the early 1990’s, much of the molecular details and mechanisms used by cells to achieve precisely regulated Wnt signalling remain elusive. A better understanding of Wnt signalling events will not only improve our understanding of how multicellular organisms have evolved, but will be of huge medical importance, considering the well documented significance of Wnt signalling to human diseases such as cancer and neurodegeneration.

Wnt is the name given to the lipid modified signalling proteins released from “source” cells (Wnt producing cells) and there are 19 different Wnt proteins known. They elicit cellular signalling events in nearby “responding” cells upon engagement with cognate Wnt receptors located on the cell surface membrane of these responding cells (see Figure 1 below). 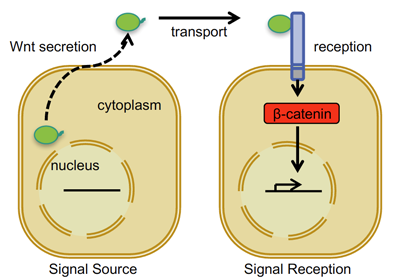 There are multiple Wnt receptors, of which the ten different Frizzled receptors and at least two co-receptors from the lipoprotein receptor family (LRP5 and LRP6) are relevant for the branch of Wnt signalling we focus on: termed Wnt/beta-catenin signalling. As seen in Figure 1, the activation of Wnt/beta(β)-catenin signalling in responding cells results in changes in the expression of specific target genes (Wnt target genes).
For more details on the Wnt signalling pathway visit “The Wnt Homepage”:
http://web.stanford.edu/group/nusselab/cgi-bin/wnt/

Within the KIT our goal is to use interdisciplinary approaches to address some of the unanswered questions relating to Wnt signalling.

CRISPR/Cas9 has become a routine gene editing method and we use it to endogenously tag Wnt pathway components with e.g. fluorescent proteins. This allows a range of imaging and biophysical methodologies to be performed on cells harbouring such fluorescently labelled components, under physiologically relevant conditions. 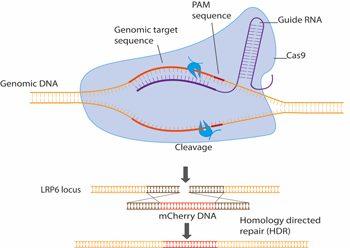 Figure 2. Schematic representation of LRP6 endogenous tagging using CRISPR/Cas9. Here, the fluorescent protein mCherry is inserted into the endogenous LRP6 genetic locus, resulting in the creation of an LRP6-mCherry fusion protein that can be visualised in live cells using fluorescent microscopy based methods

In order to identify new components that function to regulate Wnt signalling, cell culture based expression screening is performed. One way of doing this is to co-express a chosen Wnt pathway component together with large collection of genes and screening for a desired read-out, such as Wnt signalling activity or modification of the Wnt pathway component. For example, in order to identify potential modifiers of the Wnt co-receptor, LRP6, we co-transfect cells with LRP6 and pools of cDNA clones.

Figure 4. Example of cell based cDNA expression screen in 96-well format, where functional modifiers of the co-receptor LRP6 are identified from large gene collections (cDNA clones) upon their co-expression in cells

In collaboration with other groups within IBCS-FMS and other institutes at the KIT we make use of new technologies to aid our research, such as: 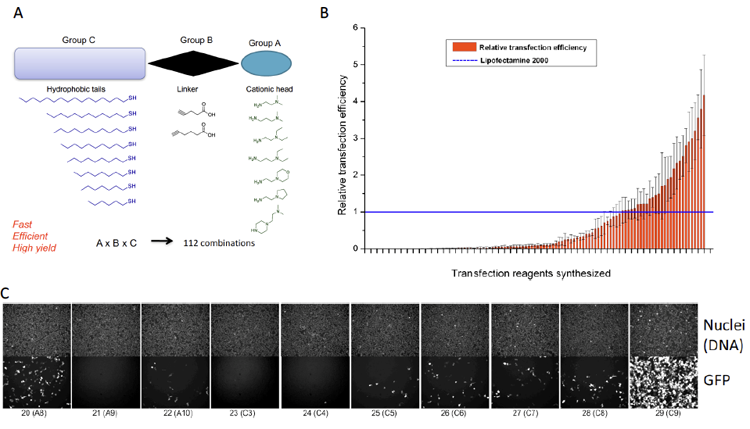 Figure 5. Example of interdisciplinary project at our institute (in collaboration with Dr. Pavel Levkin). Combinatorial chemisty was used to synthesis a library of novel lipid-like molecules (A). These molecules were used to prepare novel liposomal reagents that were subsequently screened for their ability to deliver GFP plasmid DNA into cells (B and C).

In collaboration with Dr. Pavel Levkin, we founded a biotech company based on our proprietary technology, called ScreenFect®GmbH, which commercialises our novel ScreenFect® transfection reagents (See Figure 5).