This page reflects the research carried out in our group until early 2020. New topics are being developed and will be showcased in the near future. One of our endeavors is to move towards sustainable polymer chemistry. If you are interested in this too, please contact Guillaume!

One of our prime research interests lies in the synthesis of nanostructures based on block copolymer self-assemblies. We are particularly focusing on reactive nanostructures which can be obtained by self-assembly either in solid state or in solution.

One of our aims is to develop versatile polymer films which can template the ordering of biomolecules at a scale approaching the dimensions of the biomolecules themselves. We are currently looking for simple systems which allow maximal flexibility in terms of functionality. For this purpose, we synthesize functional block copolymers by reversible-deactivation radical polymerization techniques and study their self-assembly.

Furthermore, we also synthesize nanoparticles based on the self-assembly of block copolymers in solution. After synthesis of an amphiphilic block copolymer precursor, core-shell nanoparticles can indeed be obtained by nanoprecipitation. One of our target in this field is to establish versatile platforms for enzyme immobilization, ideally in a specific/controlled manner. 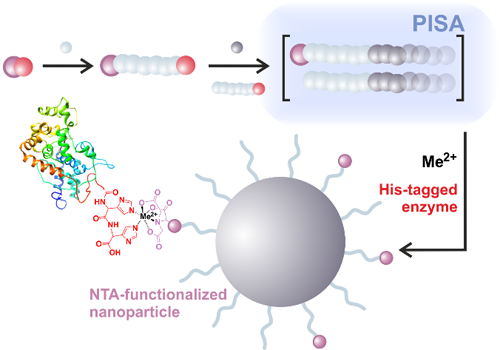 Besides the classic nanoprecipitation method, we use the technique of polymerization-induced self-assembly, so-called PISA, as an efficient method to obtain core-shell nanoobjects in a reduced number of synthetic steps and higher concentrations. The PISA method was first developed within the PhD thesis of Guillaume in the group of Prof. B. Charleux, back in 2004-2005. It has now been widely adopted in the synthetic polymer community, particularly by those working with radical polymerization, and popularized by the group of Prof. S. P. Armes, who unraveled many of the subtleties of the process.
We are particularly interested to use the PISA method for new applications and are also investigating some fundamental aspects governing the formation of various nanostructures such as spheres, worm-like micelles/fibers, and vesicles.

In all of the above cases, the final materials may find application in domains such as catalysis, biosensor design, medicine, or biology, to cite but a few.

A part of our group is dedicated to provide new methods or improve current methods to impart more stability to proteins, particularly enzymes as it is often desired to employ them in conditions unfavorable for them (temperature, pH, ionic strength).

One very efficient method to increase the range of conditions under which enzymes can be employed is their encapsulation in a thin layer of hydrogel at the single-molecule level. The advantage of the so-called single-enzyme nanogels (SENs) resides therefore in a minimal change in the biocatalyst dimensions, which may be very crucial in some applications. For instance, in comparison to classic encapsulation in larger micro-/nanogels, diffusion processes may be less hindered. During surface immobilization, the density of biocatalysts may also be significantly higher.
We have for instance demonstrated the possibility of grafting as-formed SENs onto surfaces by thio-Michael addition, in very mild conditions. It allowed to employ microcontact printing for the establishment of stable protein patterns.

Besides surface immobilization or crosslinking, enzymes – as well as proteins in general – are often stabilized by attachment of polymer chains by their end group to the surface of the biomolecule. We are looking at novel chemical routes for this purpose, particularly those which enable straightforward variation of the polymer structure. In this regard, the most largely employed polymer for this purpose is polyethylene glycol (PEG), as seen for instance in some commercial drugs. However, for the future it is important to look for alternatives in order to offer more flexibility and counter possible issues linked to the immunogenicity of PEG or provide further enhanced characteristics.

Until recently, most studies on cell behavior were carried out on flat surfaces, typically in Petri dishes. However, in natural environments, cells are not only organized in a two-dimensional fashion (e.g., skin cells) but also in three dimensions. Several studies showed that the three-dimensional geometry of cell culture scaffolds is essential for cells typically growing in such conditions. Furthermore, mechanical properties of the material as well as the surface chemistry play crucial roles. Therefore, in a project with the teams of Christopher Barner-Kowollik, Martin Bastmeyer, and Martin Wegener (all at KIT), we developed methods to produce 3D free-standing microscaffolds with spatially tunable surface functionality. For this purpose, a very fine 3D printing technology named direct laser writing (DLW) was employed together with custom polymerizable inks. These incorporate photoreactive groups that are able to survive the DLW process. This lead to photoreactive microscaffolds, which can subsequently be surface functionalized using custom-made DLW setups.

We are always looking for synthetic strategies to increase the flexibility of the process and the accessibility for a broader range of users, ideally for cell biology research teams.

In relation to the aforementioned project on 3D microscaffolds, several methodologies were developed to tailor the surface chemical functionality of a range of materials, from silicon-based materials to polycarbonate and cellulose. These methods should enable control over the spatial distribution of chemical entities and generally proceed in conditions as mild as possible to be applicable to a biological context.
We established photopatterning with various types of reactions: thiol-ene Michael addition, hetero-Diels–Alder cycloaddition, 1,3–dipolar cycloaddition, nitroxide radical coupling, reversible [4+4] cycloaddition, imine or disulfide formation.

Besides photopatterning, for some purposes, we use engineering approaches such as microcontact printing or dip-pen nanolithography, the latter in collaboration with Michael Hirtz (INT, KIT).

Most of us having a polymer chemistry background and considering the aforementioned projects, we are obviously still very active in the synthesis of novel functional polymers and their modification.